Jon Burgerman is a UK artist, living in the USA. During my time for Vacuum! Magazine (2004),  I had the chance to ask him a number of questions. Find out more about him through the links below the interview.

Hello Jon. Please, introduce yourself to the Burgerman-loving crowd. Who are you and how do you fill your days?
Jon: Hello, I fill my days with bouts of doodling, snoozing and staring out of the window. Intersperse between these activities is a lot of emailing, trawling of the internet and drinking strong tea.

You have a very pleasant website. In fact, I know a lot of youngsters (as in very young) who really like the idea too. Have you made the website yourself completely?
Jon: Over the last few years I’ve been piecing it together with my basic knowledge of Flash. It’s got a bit out of hand and has taken on a life of it’s own – sometimes I check it to see if anything’s changed before remembering I’m the one who has to update it. I’m glad people like it, it’s hopefully a fun and enjoyable way to take a peek at my work and pass a few minutes. 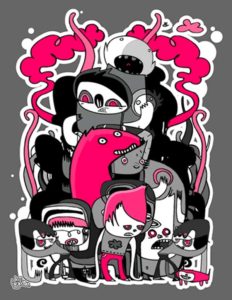 If I would want to have some custom-made stickers, how would I have to approach you?
Jon: Just send me an email. I get a fair amount of commissions and jobs from people visiting the site and dropping me an email. It’s often the first point of contact. If you wanted you could send me a big bag of money, felt tip pens and cake – that’s always a good way to approach someone.

The things you do as a designer / illustrator, have you learned these on yourself, or did you follow an education for it?
Jon: I studied Fine Art at university in the city of Nottingham (famous for Robin Hood and drunken youths). I learnt bits and bobs on the Fine Art course but my real education came once I started trying to make a living on my own. A lot of the stuff I know (which isn’t much admittedly) I learnt through experimentation and studying design books. Working and lots of practice has been the best form of learning for me.

How did you witness your ‘college-period’?
Jon: My time at University was fun but probably a bit misguided. I wish I had used the equipment a lot lot more. They had screen printing rooms which I dabbled in but didn’t use to its full potential. I would love to go back there to use them – only they scrapped the screen printing workshops and replaced them with computers.

Once you graduate, the most common thing to do is find a job. Was it that simple for you too?
Jon: I had a job during most of my time at college so I was lucky – I just continued working there after I graduated. I designed boxes, bags and packaging for retail and promotion. It was a great job, I learnt how to do a lot of things on the computer and gained a lot of experience. Also it meant I could use the office supplies for my own stuff – on the sly of course.

The designcommunity is one that sticks together firmly. But on the otherhand, it makes it harder for people to earn a living from it. What do you think about competitive design? Only the best survive?
Jon: No, the best don’t survive – it’s much more complicated than that. And the best are only the best in some people’s eyes. Design is like any other creative industry, talent will only take you so far, and it’s not always the most talented that are the most successful.

In what way do Pixelsurgeon, Design is Kinky, Day14, One Huge Eye and other support you?
Jon: They are my friends and they often put in a good word for my site when it gets a rare update. Day 14 are publishing my first book too, it’s called ‘Hello Duudle’; a collaboration of drawings between Sune Ehlers of www.duudle.dk and myself. It should be out very soon.

When you go out in weekend, are you the person drawing on beer-cards and napkins?
Jon: Once I was eating in a restaurant, Wagamama, where they have paper place mats on the table. Whilst enjoying my noodles I penned what I thought was a really nice drawing. I was being especially careful not to spill my lunch and ruin it (normally I am really messy as I shovel food down my throat). As I was finishing off, I was thinking about how I was going to scan it in later at home, when the waitress came along and snatched away my bowl, screwing up and throwing away the place mat underneath…
Leave anything clean near me for a few minutes and it’ll probably get drawn over.

You featured tons of cool graphics (and workshops) in magazines such as Computer Arts (projects, special), SL Magazine, … How did all this happen? Did you send in a portfolio or have they contacted you themselves?
Jon: They tracked me down and held my arm behind my back until I agreed to do some work for them. 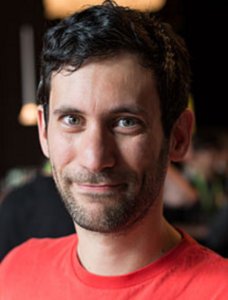 How important is a portfolio for a designer anyway?
Jon: It’s still pretty important, though I think it can take different forms such as on a CD or online now. The classic ‘work in a folder’ is still what most people like to see. Nothing on screen can beat a nicely printed piece of work.

You recently made some buttons / badges. What do you think of the final result?
Jon: They came out well I thought seeing as they were all hand drawn. Wear It With Pride made a really good job of them. They’ve nearly sold out now so people must of liked them too.

Have you got any final advice for the upcoming designers?
Jon: Not really, just remember to be open to experimentation, always carry a sketchbook with you and to enjoy your work.